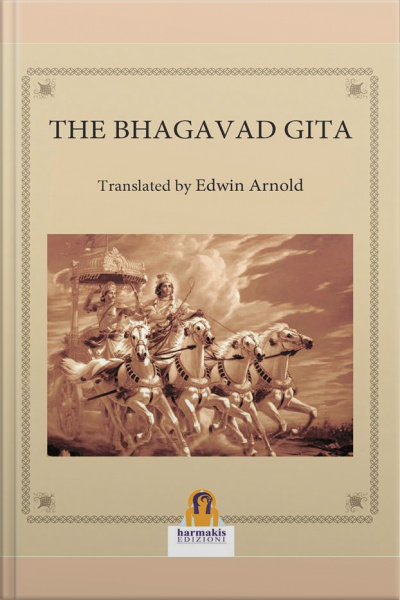 The Bhagavad Gita, the greatest devotional book of Hinduism, has long been recognized as one of the world’s spiritual classics and a guide to all on the path of Truth. It is sometimes known as the Song of the Lord or the Gospel of the Lord Shri Krishna. According to Western scholarship, it was composed later than the Vedas and the Upanishads – probably between the fifth and second centuries before Christ. It is a fragment, part of the sixth book of the epic poem The Mahabaratha. The Mahabaratha tells of the Pandavas, Prince Arjuna and his four brothers, growing up in north India at the court of their uncle, the blind King Dhritarashtra, after the death of their father, the previous ruler. There is always great rivalry between the Pandavas or sons of Pandu and the Kauravas, the one hundred sons of Dhritarashtra. Eventually the old king gives his nephews some land of their own but his eldest son, Duryodhana, defeats Yudhisthira, the eldest Pandava, by cheating at dice, and forces him and his brothers to surrender their land and go into exile for thirteen years. On their return, the old king is unable to persuade his son Duryodhana to restore their heritage and, in spite of efforts at reconciliation by Sanjaya, Dhritarashtra’s charioteer; by Bheeshma, his wise counsellor; and even by the Lord Krishna himself, war cannot be averted. The rival hosts face each other on the field of Kurukshetra. It is at this point that The Bhagavad Gita begins. When Prince Arjuna surveys the battlefield, he is overwhelmed with sorrow at the futility of war. The teachings of The Bhagavad Gita are spoken by the divine Lord Krishna, who is acting as the prince’s charioteer. They are overheard by Sanjaya and reported back to King Dhritarashtra. When Krishna has finished speaking to Arjuna, the two armies engage. The battle lasts eighteen days and by the end of it nearly all of the warriors on both sides are dead save Krishna and the five sons of Pandu.