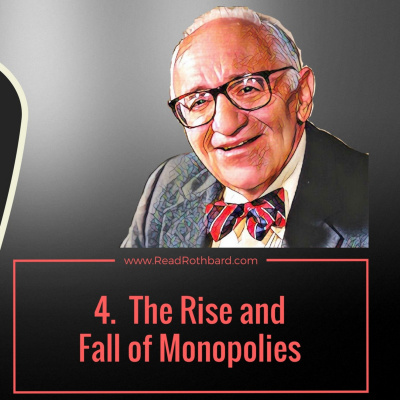 The American Economy and the End of Laissez-Faire: 1870 to World War II 4. The Rise and Fall of Monopolies Lecture by Murray N. Rothbard Petroleum entered the industrial scene in 1859 with John D. Rockefeller's hard work. As the first manufacturing corporation, Standard Oil created a monopoly in kerosene refining by buying others out. A huge drop in the price of fuel followed, benefiting consumers, due to production efficiencies. Rothbard, then, discusses pietists, prohibitionists and the big political shift of 1896. Pietists, prohibitionists, anti-immigrationists, and women suffragettes had made a big Republican drive before 1890. But then a big, sudden shift in politics occurred, with Democrats capturing the big Midwest states, due to demographics of Germans, higher birth rates, anti-prohibitionists, and hard money standards. After this, the Republican party got more moderate and the  Democratic party got captured by extreme pietists in 1896. The South became a fully Democratic region. The Panic of 1893