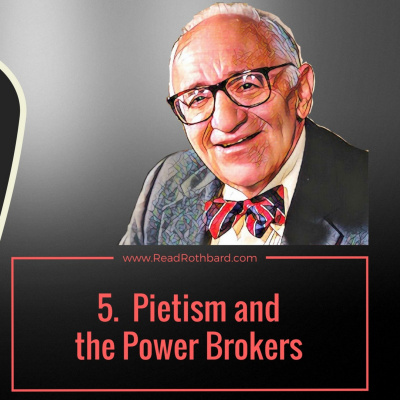 The American Economy and the End of Laissez-Faire: 1870 to World War II 5. Pietism and the Power Brokers Lecture by Murray N. Rothbard When pietists shift to the Republican party, they form the progressive movement of 1900-1920. Rockefeller- McKinley forms alliances with power brokers like Kuhn, Loeb & Co., and Harriman (versus the Morgans). Teddy Roosevelt (Oyster Bay wing of the family) was financially in with the Morgans. The Panama Canal caper included a fake revolution in Panama in order to give more U.S. money to the French canal company, whose shares were owned by a Morgan group. In industry, iron and steel found double protection through tariffs and greenback inflation. Morgan tried to establish cartels, but failed. The iron and steel companies then turned to government to do it for them- a progressive move. Lecture 5 of 13 presented in Fall of 1986 at the New York Polytechnic University. This lecture on YouTube: https://youtu.be/2K2u82fMXE8 Sourced from: https://mises.org/library/american-ec