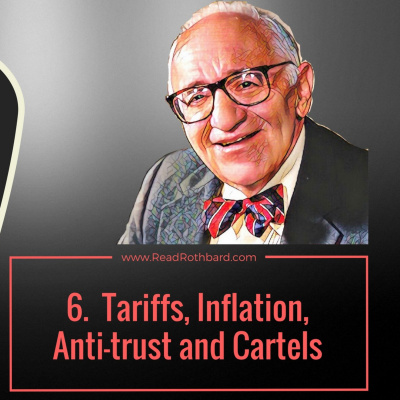 Episode 46 - American Economy and the End of Laissez-Faire - 6 of 13 - Tariffs, Inflation, Anti Trust and Cartels

The American Economy and the End of Laissez-Faire: 1870 to World War II 6. Tariffs, Inflation, Anti-Trust and Cartels Lecture by Murray N. Rothbard The Sherman Act outlawed restraint of trade. The Clayton Act added to that. Anti-Trust hysteria came in the 1940-50s. Whatever you did would be considered monopolistic. The charges didn't come from consumers, they came from whining competitors. It was government-enforced blackmail. The US leather industry was put out of business. The corn starch industry was put out of business. Retail cartels, enforced by the government, imposed artificially higher prices on products. It was the welfare state in action. Claims of economic privilege were whipped up by racial and ethnic claims. Teddy Roosevelt is my least favorite person. He liked killing. Lecture 6 of 13 presented in Fall of 1986 at the New York Polytechnic University. This lecture on YouTube: https://youtu.be/-Ine69dwMz4 Sourced from: https://mises.org/library/american-economy-and-end-laissez-faire-1870-w