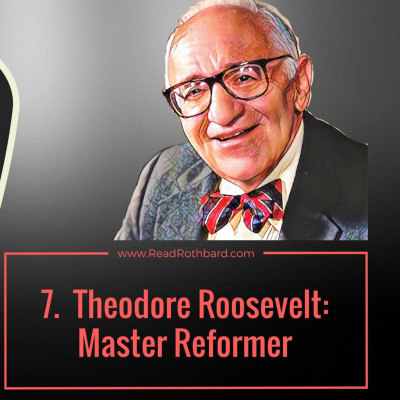 The American Economy and the End of Laissez-Faire: 1870 to World War II 7. Theodore Roosevelt: Master Reformer Lecture by Murray N. Rothbard Assassinations in American are only by lone nuts. No one who benefits is ever suspected, like Lyndon Johnson. The progressive period saw a re-alliance of church and state - secularized extreme Pietism (Protestant sects) with government as savior by intervening in markets. Meat packing regulations and the Sugar Trust under Teddy Roosevelt, passed in June 1906. The myth was that the meat was diseased and people were dying of it. That was false. The big meat packers were asking for regulations because they wanted to sue their small competitors. The Pure Food and Drug Act was a prototype for the whole progressive movement toward purity of body, mind and soul. Adulteration only meant any change in the name of the sugar chemistry. Lecture 7 of 13 presented in Fall of 1986 at the New York Polytechnic University. This lecture on YouTube: https://youtu.be/IaxuwpUpKeA Source