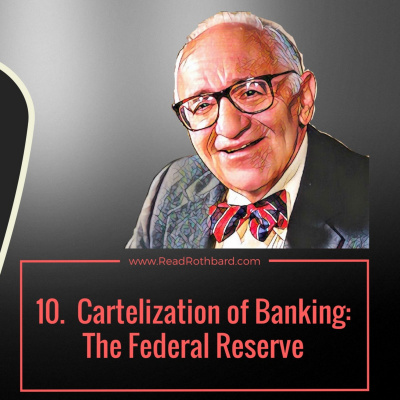 Episode 50 - American Economy and the End of Laissez-Faire - 10 of 13 - Cartelization of Banking: The Fed

The American Economy and the End of Laissez-Faire: 1870 to World War II 10. Cartelization of Banking: The Fed Lecture by Murray N. Rothbard Bernard Baruch ran WWI as an absolute collectivist controller. The Federal Reserve was created in 1913 by Morgan men to cartelize the banking system and limit competition. Production and prices were regulated via the corporate state. Morgan men wrote the FTC- Federal Trade Commission Act. Progressive means statist and corporatist. The New Republic, a proto fascist magazine- appeared. Banks create fake warehouse on-demand receipts. One was a note, but the more sophisticated way was by having open-book accounts by which you have a demand deposit, not a bank note. The check is a transfer order and the temptation for counterfeiting fake warehouse receipts was great. This is fractional reserve banking. Rothbard thinks it is fraud. It increases the money supply in an inflationary manner by creating money out of thin air. All banks are technically insolvent. The Central bank