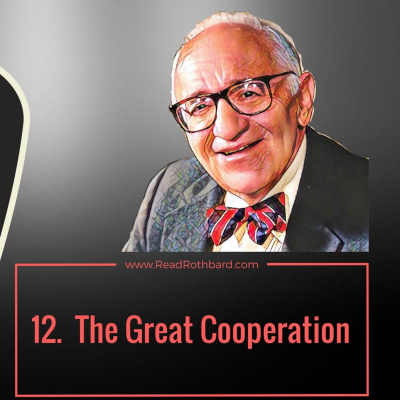 The American Economy and the End of Laissez-Faire: 1870 to World War II 12. The Great Cooperation Lecture by Murray N. Rothbard Public housing, planned cities, government power plants, and coerced unionism were all part of the great cooperation between corporations and government through WWI and WWII.  Milton Friedman proposed the withholding tax in WWII. Statistics came into being. Cartels were created to manage many industries, e.g. railroads and food. Unions were pro-war forces. Fascism was considered great. Civil liberties were dropped. Coolidge continued as a Morgan man. Lecture 12 of 13 presented in Fall of 1986 at the New York Polytechnic University. This lecture on YouTube: https://youtu.be/VIaOuSt13v0 Sourced from: https://mises.org/library/american-economy-and-end-laissez-faire-1870-world-war-ii We are not endorsed or affiliated with the above. https://creativecommons.org/licenses/by-nc-nd/3.0/legalcode Presented by: Read Rothbard is comprised of a small group of voluntaryists who are