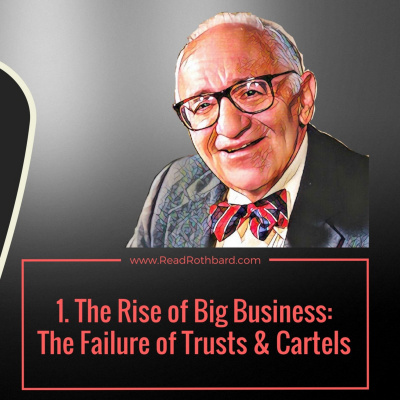 Episode 54 - 1. The Rise of Big Business: The Failure of Trusts and Cartels - Murray N Rothbard

20th Century American Economic History 1. The Rise of Big Business: The Failure of Trusts and Cartels Lecture by Murray N. Rothbard In the 19th Century and the beginning of the 20th, the rise of big business on the free market could not create monopolies and cartels. Only government could do that. Government tried. Government failed. 1 of 8 from Murray Rothbard's 20th Century American Economic History lecture series. Sourced from: https://mises.org/library/20th-century-american-economic-history We are not endorsed or affiliated with the above. https://creativecommons.org/licenses/by-nc-nd/3.0/legalcode Presented by: Read Rothbard and Actual Anarchy Read Rothbard is comprised of a small group of voluntaryists who are fans of Murray N. Rothbard. We curate content on the www.ReadRothbard.com site including books, lectures, articles, speeches, and we make a weekly podcast based on his free-market approach to economics. Our focus is on education and how advancement in technology improves the living