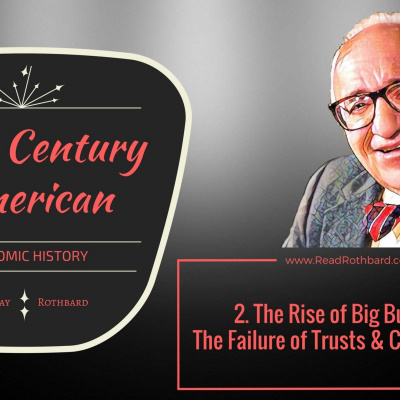 Episode 55 - 2. The Rise of Big Business: The Failure of Trusts and Cartels continued Murray N Rothbard

20th Century American Economic History 2. The Rise of Big Business: The Failure of Trusts and Cartels continued Lecture by Murray N. Rothbard Despite the drive for monopoly, only oil, sugar and corn products ended up dominated by a particular company. Bigger was not better. Biggest was not best. Smaller and more mobile was more competitive. Major inventions are still coming from small firms. 2 of 8 from Murray Rothbard's 20th Century American Economic History lecture series. Sourced from: https://mises.org/library/20th-century-american-economic-history We are not endorsed or affiliated with the above. https://creativecommons.org/licenses/by-nc-nd/3.0/legalcode Presented by: Read Rothbard and Actual Anarchy Read Rothbard is comprised of a small group of voluntaryists who are fans of Murray N. Rothbard. We curate content on the www.ReadRothbard.com site including books, lectures, articles, speeches, and we make a weekly podcast based on his free-market approach to economics. Our focus is on educ