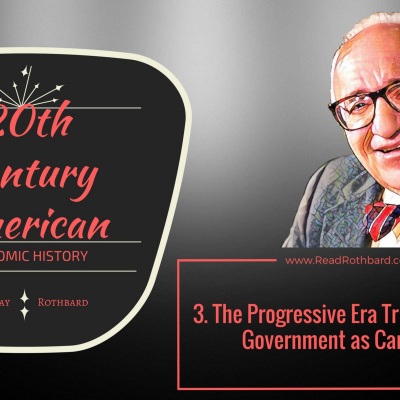 20th Century American Economic History 3. The Progressive Era Triple Alliance: Government as Cartelizer Lecture by Murray N. Rothbard The progressive period birthed the cancerous growth of the welfare/warfare state, fake capitalism, the middle way, neomercantilism, and the corporate state. Morgan and Rockefeller men warred with each other over many issues and many generations. Effective competition was attacked as government attempted to cartellize business. 3 of 8 from Murray Rothbard's 20th Century American Economic History lecture series. Sourced from: https://mises.org/library/20th-century-american-economic-history We are not endorsed or affiliated with the above. https://creativecommons.org/licenses/by-nc-nd/3.0/legalcode Presented by: Read Rothbard and Actual Anarchy Read Rothbard is comprised of a small group of voluntaryists who are fans of Murray N. Rothbard. We curate content on the www.ReadRothbard.com site including books, lectures, articles, speeches, and we make a weekly podcast