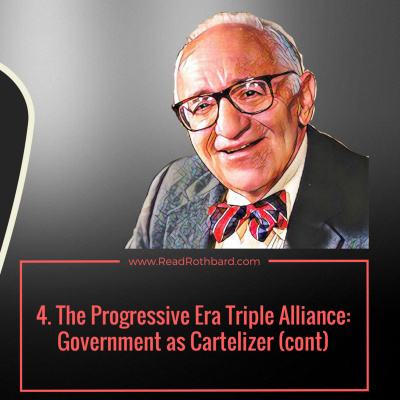 20th Century American Economic History 4. The Progressive Era Triple Alliance: Government as Cartelizer continued Lecture by Murray N. Rothbard The state must invest in human beings the same way you invest in cattle on a farm. This progressive corporatist view was behind the creation of the Rockefeller Foundation. Industrial solutions were to be strictly scientific, e.g. minimum wage laws, public works, and government concentration camps (CCC). The Federal Reserve system followed the national banking system. The free banking system had had the least inflation. Government has had a long history of bailing out big banks that might fail. Benjamin Strong was the head of the Federal Reserve system throughout his life. He was a Morgan man. The Fed had the monopoly to issue cash. Puritanism is the haunting fear that somebody somewhere might be happy. Prohibition was just part of the progressive platforms. 4 of 8 from Murray Rothbard's 20th Century American Economic History lecture series. Sourced from: htt