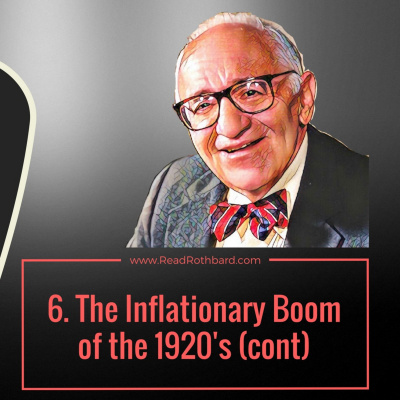 20th Century American Economic History 6. The Inflationary Boom of the 1920s (continued) Lecture by Murray N. Rothbard Republican policy has always been high tariffs, keeping foreign goods out. But, then the US would lend those countries money to be able to pay for our higher-priced exports. This peculiar foreign-lending scheme included farm goods. Until 1928 there was an enormous foreign lending boom. The stock market collapsed in October 1929. The Federal Reserve Act of 1913 was for inflationary purposes. The banks endorsed acceptance markets for awhile. Morgan men continued to push price stabilization, yet prices in free markets actually fall, benefiting consumers. In 1929 when prices were falling, corporate bigshots wanted prices pushed back up. The entire banking system was toppling by 1933. It should have been allowed to topple, says Rothbard. The European currencies waged war against each other when everybody was off the gold standard. The League of Nations was to get the US off the gold standard