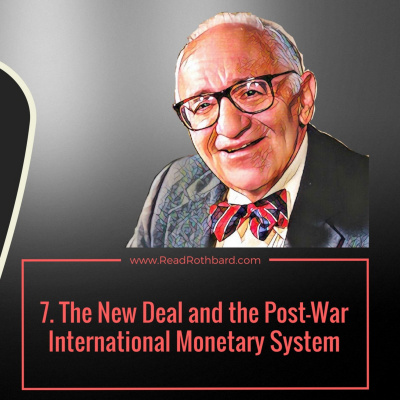 20th Century American Economic History 7. The New Deal and the Post War International Monetary System Lecture by Murray N. Rothbard The World Economic Conference of 1933 in London met to deal with America's Great Depression, but, without consulting anyone, FDR declared that the U.S. would not agree to the proposal because he wanted to take the U.S. off the gold standard in order to inflate the dollar. The gold-supporting British and French were horrified; Nazi Germany was delighted. Hitler loved FDR's New Deal. Morgan men continued to hold power positions internationally, creating worldwide inflation. By 1945, Bretton Woods had established the rules for post-war international monetary management. On 15 August 1971, the U.S. brought this system to an end, rendering the dollar a fiat currency. 7 of 8 from Murray Rothbard's 20th Century American Economic History lecture series. Sourced from: https://mises.org/library/20th-century-american-economic-history We are not endorsed or affiliated with the abov