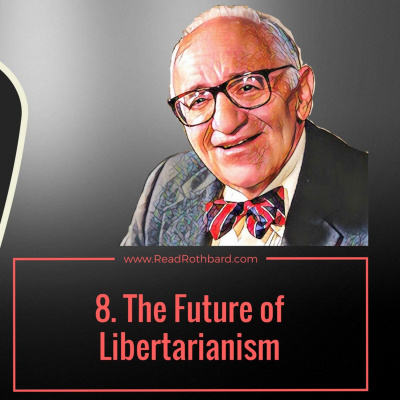 20th Century American Economic History 8. The Future of Libertarianism Lecture by Murray N. Rothbard Rothbard explains why he is optimistic. The norm of civilization has been despotism and statism. The quantum quality change in history has been the Industrial Revolution from mid-18th Century to mid-19th. Only the free market, libertarian society can expand this viable and moral industrialism. A society without a ruling class results. Peace and a classless society are classical liberal goals. Some individuals seize control of the state apparatus and use taxes to rob the producers. Class conflicts occur because one group in society are tax eaters and the other group are tax payers. Industrialism created so much wealth that cartels and Keynesianism have been able to eat away at the fat. Yet, the cause and effect chain is now much shorter. Shortages resulting from price controls now show up quickly. There is a general revulsion against the state. 8 of 8 from Murray Rothbard's 20th Century American Economic