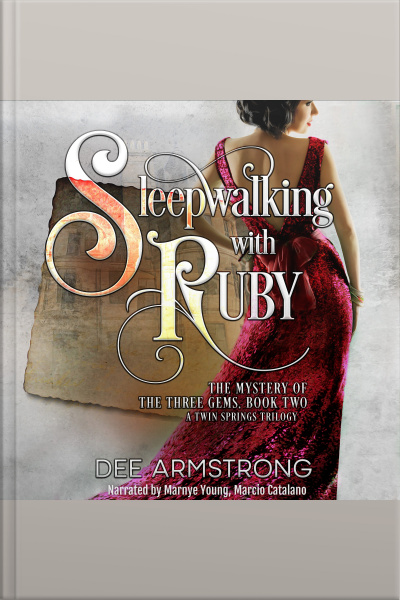 Sleepwalking with Ruby The Mystery of the Three Gems

It's 1928. A fire blazed through Twin Springs Hotel and killed General Rockwell's three daughters, Emerald, Ruby and Amethyst. How they really died has remained a secret.

Nearly one-hundred years later, Broadway Star Ava Fairbanks returns to Twin Springs with her own secrets—what happened in Director Hollingsworth's office and why his wife committed suicide on stage beside her.

Ava's sleepwalking episodes return with her. In her dreams, she plays a new role as Ruby Rockwell and the stage is Twin Springs circa 1928. Ava finds herself waking up in the most embarrassing places, the Crystal Ballroom, the Aviary, in new Security Manager Jaxon Wolfe's arms.

The press chase down Ava in Twin Springs, wrongly accusing her of destroying Hollingsworth's marriage and causing his wife's suicide. Director Hollingsworth checks into the hotel and decides to cast Ava as his new plaything, using pain and persuasion to make her agree.

Fearing she is fated to die exactly like Ruby, Ava turns to Jaxon for help. When she finds out that Jaxon isn't who he said he was, she is forced to decide if she can trust him, not only with her love, but with her life.

The last beautiful woman Ex-Special Forces Sergeant First Class Jaxon Wolfe trusted gave him false intel that cost the lives of most of his team. He's traded in his Army combat boots for a Private Investigator license, and went to work at his family's agency, White Wolfe Investigations. His first assignment—go undercover and determine if Twin Springs is filing fraudulent insurance claims. His second assignment—don't lose his heart to the gorgeous Ava Fairbanks.

When he finds out the impossible—that Ruby Rockwell is haunting Ava while she sleeps, he has a new mission—protect Ava. But, how can Jaxon protect the woman he loves from a sultry, hundred-year-old ghost?